Aside from storing an identifier related to your user account in a cookie when you log in – basic functionality –, we’d like to use additional cookies and services by Google and LeadFeeder to gain insights into your usage of our service and measure the success of our marketing campaigns.
While accepting this request is, of course, optional, your help would be greatly appreciated!

Have you ever wondered why commercials sound louder than your favorite TV shows? Or why you have to adjust the playback volume on your television when switching between channels? The answer is that until recently, there was no standard way to measure the perceived loudness of sound recordings. Instead, audio productions were (and still are) normalized to peak levels, which do in no way determine how loud a signal is.

In this article we will discuss the EBU recommendation R128, a new and open standard for balancing audio programs according to their actually perceived loudness.

This recommendation marks one of the most fundamental changes in the history of audio in broadcasting and solves a major source of irritation for television and radio audience around the world: that of the jump in audio levels at the breaks within programmes, between programmes and between channels (from On the Way to Loudness Nirvana).

Most big european broadcasting corporations are adapting their workflow to EBU R128 now, see e.g. The Loudness revolution comes to Germany and Austria.
On the other side of the Atlantic, the same method has provided the basis for the implementation of the CALM Act in the U.S., which is called ATSC A/85.
See also Too many loudness standards.

Loudness perception is surprisingly complicated. The physical sound pressure level, which is usually specified in dB, tells us very little about how loud a sound will be perceived by a listener. For example, a low-frequency tone might appear much softer than a high-frequency tone, even if it has a higher sound pressure level. This frequency-dependency of loudness perception is described by the equal loudness contours. 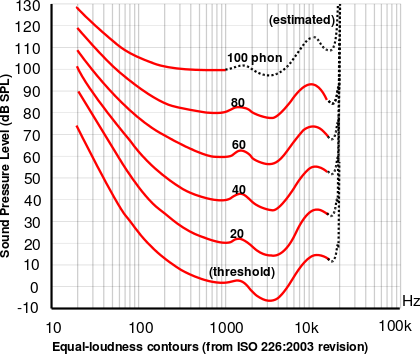 Figure from Wikipedia (with edits).

As if this wasn't confusing enough, the frequency dependency of loudness perception itself varies with sound pressure level. Moreover, loudness perception is a highly subjective affair that depends on factors such as age and possible hearing damages. In short, loudness cannot be easily measured. Florian Camerer from the European Broadcasting Union argues that, "there's never gonna be such a thing as a perfect loudness meter."

Perhaps because perceived loudness is so hard to measure, it has become common practice to normalize audio according to peak signal levels. This method, which we have already discussed in an article on "Loudness Normalization and Compression of Podcasts and Speech Audio", is driven by two somewhat incompatible concerns: 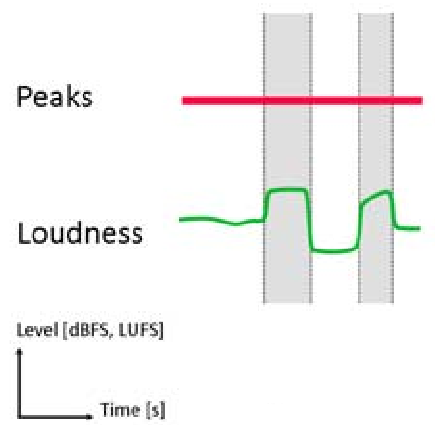 Loudness inconsistencies due to peak normalization. Figure from On the way to Loudness nirvana—audio levelling with EBU R 128 (p.1).

Because there was no loudness reference level, producers were worried that their productions would not appear as loud as everybody else's. In addition to peak normalization, they therefore used more and more dynamic range compressors and hard limiters to maximize the loudness (and thus allegedly the impact) of their programs. As a result of this Loudness War, the dynamic range of professional audio productions consistently shrank over recent decades—and with it arguably their expressivity.

Over time, it became increasingly obvious that a unified reference was required to normalize different audio programs to the same perceived loudness. An early attempt in this direction was ReplayGain from 2001. Five years later, the International Telecommunication Union introduced the more sophisticated ITU-R BS.1770 standard. Its specification is about as intuitive as its name, but suffice it to say that the standard describes an efficient and open algorithm for loudness and peak level measurement: 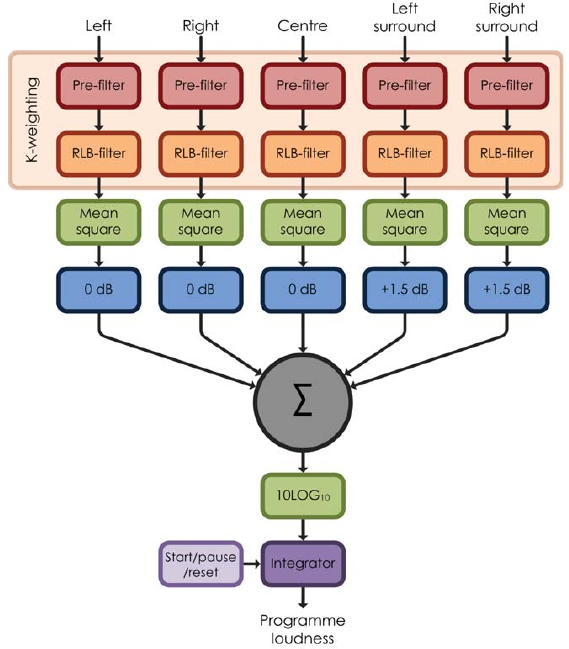 The output of this algorithm is the program loudness, measured in Loudness Units (LU). Its absolute unit is referred to as LUFS (Loudness Units with reference to Full Scale), or sometimes also as LKFS. A step of 1 LU is equivalent to a step of 1 dB.

In 2011, the European Broadcasting Corporation proposed an extension to the ITU standard called EBU R128, which uses three parameters to characterize an audio signal: 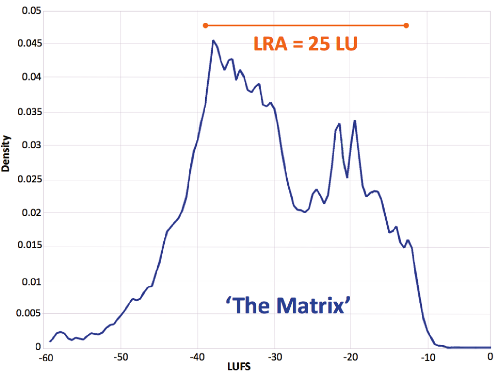 Loudness distribution and LRA for the film 'The Matrix'. Figure from EBU Tech Doc 3343 (p.13).

So what are the practical implications of all this stuff for audio production? Well, the EBU standard provides us with the means to normalize an audio production to an actually perceived loudness and punishes the tendency towards overcompression that stemmed from the practice of peak level normalization. In the words of Florian Camerer (p.2):

The fight for "Who is the loudest" disappears, mixes can be more dynamic, there are fewer dynamic compression artefacts, such as "pumping", and thus there is an overall increase of audio quality!

The EBU standard proposes -23 LUFS as the new center of the audio levelling universe (p.4), a meaningful target loudness that all audio content should be normalized to. However, Auphonic still uses a higher loudness target as default (EBU R128, ATSC A/85 and other common targets are selectable), which is discussed in Loudness Targets for Mobile Audio, Podcasts, Radio and TV.

For more detailed information about EBU R128, watch the introduction by Florian Camerer:

To wrap up, let's briefly summarize the problem: ... and its solutions:

We write about audio and the web!
See blog post overview and
articles about Auphonic.